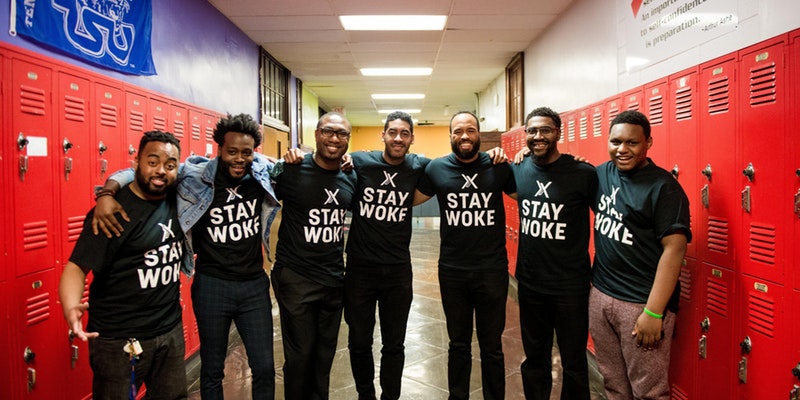 Answering the Call to Education

Earlier this year, I was able to attend the 1st National Black Male Educators Conference. I had the privilege of meeting one of the planning committee members who had good insight as to why more Black males must answer the call to education. Native of Edenton, NC, Kevin Gold is an Educator, Mentor and Visionary with a passion to do great work with the young males of color in Philadelphia. A 2010 graduate of Temple University, Kevin has spent the last 10 years learning Philly and indulging in the richness of what makes the city great while creating a platform for Male Empowerment within the fabric of the city. He’s currently a Program Director for Education Plus Health at Building 21 High School where he creates After School programming that supports the academic and personal growth of the student. He prides himself of loyalty and dedication to his craft as a mentor and hopes to someday make his mark on the city at large. He can be contacted [email protected] for additional information on best practices and next years conference.

In a field that has been dominated by women, Black male educators can change the game regarding pay, recruitment of more males and most importantly changing the direction of the school to prison pipeline that affects so many of our Black youth.

How can Black male educators advocate for equal pay in education?

I think the better question is How do we get educators of other ethnicities to see the importance of making jobs in education, more so in instruction, just as accessible to black males as it is to their counterparts. I believe once that happens, then compensation for black male educators will be matched by their level of experience, just as it is for all other educators.

In what ways can we help drive the conversation in middle and high school around advocacy for more males to become educators?

In my opinion, the most effective way to engage middle and high school students in a way that would allow them to gain interest in becoming educators is to allow them to see themselves as such. Create classroom opportunities for them to teach their peers in some way, shape or form, and most importantly, place more males of color in front of the classroom so that students see it as something to actually aspire to be. Many don’t think of becoming educators because they don’t often, if at all, see folk who look like them doing the work.

In your perspective, what were the most impactful areas of the recent Black male educators conference?

I think the most impactful areas of the NBMEC was the chance to witness black male students speak to a room full of educators about their educational experiences. That had to be my favorite part of the entire conference. I also was in awe of the amount of authentic conversations that we had amongst the participants in regards to the world of education from a black males perspective. So many connections were made and networking was beautiful to experience in the space. It’s rare you get to experience a conference of its caliber run and operated by black men, for black men. Amazing!

Young Kings, there are so many systemic downfalls within our educational system that you, Yes YOU, have the power to change. Imagine the lives of so many young people being inspired to be their better selves simply because you were their teacher…their dean…their counselor…their principal. Our black and brown babies need black and brown men to show up for them in more ways than one and you could be that person. Your presence will remind them of the power they possess to be great and be successful at whatever they put their hands to.

← Black Flight: The Other Side of Gentrification
Tutorial Helps Make the Grade →